Solar Panels Brabham – TDG SOLAR was founded to promote sustainable development in Australian society. Sustainable development is at the heart of our value system, and we will not compromise on it as we go about our everyday business in pursuit of our mission. Also, we want to make the world a better and cleaner place for future generations by delivering solar energy to millions of Australians. 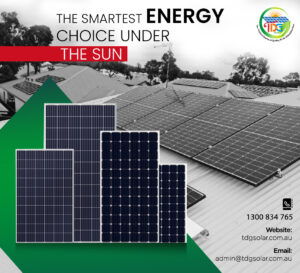 As nonrenewable energy resources become more expensive and cause more harm than good to our world, we offer cost-effective solar energy and its extensive economic advantages to your homes and businesses. Also, we hope to kickstart a new movement in Australia that will aid in the development of healthier, greener energy systems driven by the sun.

TDG SOLAR is making every effort to create a better and more sustainable society by adhering to the highest social and environmental standards and ensuring complete openness and responsibility.

As of April, there were 5,577 solar power systems installed in the Brabham (6055) postcode region. Brabham has 11,366 dwellings, giving it a solar penetration rate of 49 percent. This is greater than the Western Australian state average, which has a statewide solar home solar penetration of 34%. So, in comparison to the rest of the state, Brabham performs admirably.

Rooftop solar panels in Brabham, Western Australia should be oriented north for the greatest output. The usual rule of thumb for a suitable panel angle is that it should be around the same as the latitude. In Brabham’s case, that is 31 degrees, although generally, whatever your rooftop angle is will do (unless it is less than 10 degrees, in which case tilt frames may be required).

In addition to supplying electricity to your house, Brabham solar system installation owners might be compensated for excess energy created. Feed-in tariffs in Western Australia now range from 3c to 20c per kilowatt-hour exported. So it’s critical to compare energy suppliers in the 6055 regions to get the best electricity plan.

You may have noticed solar panels erected in a variety of locations. They are made up of individual solar cells known as photovoltaic cells, abbreviated as PV cells. These are comparable to the PV cells seen in solar-powered calculators and other gadgets. When photons, or particles of sunshine, strike the PV cells of a solar panel, they are transformed into electrons of direct current or DC power. The inverter transforms direct current (DC) electricity to alternating current (AC), which is what you generally use in your house for appliances, lighting, heating systems, and other devices. Check out some solar panels for your house, such as a 3.9 kw solar system, and take advantage of the benefits of these small solar panels.

TDG SOLAR guarantees a return on investment in the shortest amount of time. You begin saving money on utility bills and lowering operational expenditures from day one, resulting in the highest ROI. Our advisors will give you a timetable and statistics for the estimated ROI once the solar energy system is operational.

TDG SOLAR provides the most accurate pricing based on your requirements. Our trained advisors make recommendations depending on your consumption and location. All of your issues and inquiries will be answered in person.

TDG SOLAR’s primary goal is not sales. We continue to give after-sales assistance once the work of a Solar Panels Brabham is completed. We believe in establishing long-term relationships with our clients to benefit both parties. As a result, we give great after-sales service. Our continuous maintenance of solar solutions prevents the possibility of complaints or malfunctions; nonetheless, if any do occur, the settlement of the same becomes our first concern.

We have always installed the greatest goods from financially solid firms, guaranteeing that your solar investment is of the highest quality. TDG SOLAR only uses CEC-accredited items in all of its installations.

The concept of solar energy is just too lofty to toy with. As a result, TDG SOLAR has only used the best and most ethical industrial methods. We also operate with complete openness and keep our clients informed at all times. In our organization, client communication and satisfaction are non-negotiable.