Top Benefits of Solar Inverters – The solar inverter market has seen a boom in demand in recent years. This is because individuals have begun to recognize the advantages of switching to solar energy for both personal and business purposes. They’re even providing financial incentives for people who install solar power systems on their homes and businesses. 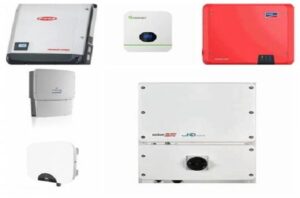 Benefits of a Solar Inverter

While your solar PV inverter can convert the sun’s rays into a useful current, that’s not all it can do. A solar panel inverter can assist you to maximize your potential production, monitoring the amount of your system, communicating with the service grid, and detecting problems that could differently wreck your solar power system.

Solar inverters monitor the voltage of your solar array to maximize the amount of power generated by the solar panels, allowing you to create the most and cleanest electricity possible.

In addition, grid-connected house solar inverters produce a purer sine wave (a measure of how smoothly the direction of current changes) than low-cost inverters, ensuring the smooth and efficient operation of your sensitive equipment.

It’s thrilling to see your solar power system create thousands of watts on a sunny day, so most homeowners want to keep track of how well their investment is performing.

Most solar panel inverters include a means to see how much energy they’re producing right now, and some even let you watch the operation of your solar system via a smartphone app or website.

Some house inverters automatically assess the operation of your solar power system and inform you if it finds an issue with any component if things aren’t performing as they should. You can also use the performance tracking feature on your home inverter to examine how your system’s components are operating and make sure it’s generating the right quantity of electricity regularly.

Communicating With the Utility Grid

Solar inverters ensure that electricity is not transported from your panels to the external power lines in the event of a brief power outage. Any line worker who may be inspecting or fixing the grid will be safe in this manner.

If your solar battery bank is full of your family doesn’t consume all of the solar electricity generated, the inverter can feed the excess electricity into the grid, allowing you to earn net energy credits.

If not properly maintained, aging and degeneration of your electrical wiring and solar equipment can lead to dangerous electrical problems such as ground faults or arcs. If this happens, the solar power inverter will instantly detect the problem and shut down, protecting the rest of the system and alerting you to the need for service before any further damage occurs.

When it becomes to assessing your solar system accessories, solar panels aren’t the single thing to contemplate. In a solar system, solar power inverters play an equivalently indispensable function. They change the electricity produced by your solar panels into a form that can be practiced by your devices, lighting, and other gadgets.

Now that you know what a solar inverter is and how it works, you can learn about the many types of inverters. There are five different types of solar inverters, each with its own set of advantages:

A central inverter is a massive device that is used in systems requiring hundreds of kilowatts (or even megawatts) of power. They’re not for home use and look like a giant metal cabinet, with each ‘cabinet’ capable of handling about 500kW of power. Commercially, they are typically for large-scale installations or utility-scale solar farms.

Hybrid inverters, often known as multi-mode inverters,’ allow you to add batteries to your solar system and are rather uncommon in Australia. It connects to the attached batteries via ‘DC coupling’ (where the solar and batteries are powered by the same inverter and the DC from the solar panels is used to charge the batteries via a DC charger). Its microelectronics control the battery’s charging and discharging.

Microinverters, as their name implies, are extremely small (about the size of a book!) The solar panels to microinverter ratio are 1:1. A microinverter’s advantage is that it optimizes each solar panel individually, resulting in more energy (especially in shady conditions).

Solar power inverters of more important quality are more effective, switching more electricity with fewer losses while the exchange process. Although growth performance differs by brand, most maximum high-quality inverters are between 97 – 99 percent efficient, thus energy damage is insignificant. However, shading and other variables can reduce the efficiency of your energy system, and your photovoltaic inverter can help you minimize those losses.