Cost of Solar Inverters Perth – Solar inverters play a critical part in a solar electric system. Solar panels provide DC (Direct Current Electricity), but with much too many variations to be useful. The inverter simply converts this DC power to 240-volt AC for use in your appliances and feedback into the grid. An inverter will not last as long as a panel, but it should last about 15 years. Around 6-7 years ago, there was an amazing boom of cheaper inverters on the Perth Solar market, and a substantial majority of them barely lasted 5 years, similar to panels. Those days are mostly behind us. 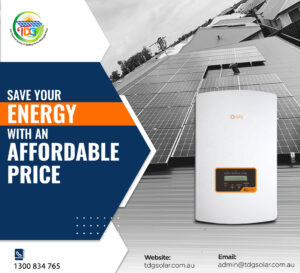 Here are the characteristics that all of our suggested inverters share:

How much will a solar inverter cost in Perth?

It all depends on what you’re after. Customers in Perth WA frequently seek SMA Solar inverters from one of the fields listed below. After a past unpleasant experience with an alternative cheaper inverter as a replacement inverter in an existing system, there is a requirement for a trustworthy inverter choice. Inverters ranging from 5kW to 10kW are the most often used in household solar systems. The price of a 5kW single-phase budget solar inverter starts at $1,000. The price of a 5kW premium single-phase solar inverter starts at $2,000. Fronius is the premier inverter brand in Perth and throughout the world.

To determine the cost of your solar panels, you must first determine your use requirements. This will define the size of the system needed. Our knowledgeable sales staff and advisors will be able to help you make an informed selection based on the following criteria:

Because solar inverters work hard all day, they wear out quickly and fail in 10 to 15 years. In Perth, inexpensive items have little chance of surviving 15 years or more. The extreme weather conditions in Perth make designing and manufacturing an effective solar inverter difficult and expensive. The price difference between a quality inverter like Fronius or SMA and a cheap inverter like Sungrow is between $700 and $1,000 per system. Enphase is the most costly option since each panel requires one micro-inverter.

If money is tight, a budget inverter is preferable to a premium inverter. A low-cost solar inverter costs around half the price of a high-end one. During the first 15 years, the premium inverter is less likely to fail. Even if it fails, the warranty will cover the assistance and replacement.

The following describes each type:

This is the most popular form of inverter used in homes. Except for Enphase, all of the solar inverters listed above are string inverters. On a domestic solar power system, there is usually one per installation.

These are enormous inverters used for solar systems with capacities of hundreds of kilowatts or even megawatts. They have the appearance of large metal cabinets and can hold up to megawatts of capacity per enclosure.

A string inverter is required for an optimizer system, but optimizers are then attached to the rear of the solar panels, maximizing each panel’s output under a range of situations. Tigo brand optimizers do not need you to optimize every panel in an array, unlike Huawei and Solar Edge optimizers must (and are inverter agnostic), which keeps prices low.

The hybrid inverter communicates with the battery via a mechanism known as ‘DC coupling,’ and its electronics manage the battery’s charging and draining. There is currently a relatively limited selection of hybrid inverters on the Perth market, but this will expand as battery storage becomes more popular.

If you wish to retrofit batteries into your solar power system, or simply keep your battery system independent from your solar panels (i.e.

In Perth, the normal guarantee duration for solar inverters is ten years. Some firms allow you to prolong this time for up to 20 years. The cost of the materials necessary to get your inverter working is covered under the manufacturer’s guarantee. They have the option of replacing the complete inverter. This is yet another incentive to choose a reputable contractor to build a rooftop solar system. To summarise, solar inverters are an essential component of a solar installation. Professional installers will assist you in selecting the finest solar inverter for your solar system.